The combination of environmentalism and fashion

Essentially, there is a certain paradox between fashion and environmental protection. It is difficult to say that those who line up to buy reusable bags costing thousands of dollars are environmentally friendly. Most of the time, so-called green design just means the latest technology and a lot of money.

The reason why container building is a combination of environmental protection and fashion is that first of all, the exploration of the possibilities of prefab modular building is exciting, from disaster relief shelters, first aid centers to luxury apartments, holiday homes, roadside stores, adventure In campsites, containers can be transformed into houses for almost any purpose.

It is like a prefabricated space that can be transformed in different ways according to its use, and a series of living facilities can be easily transformed. This construction method using prefabricated parts can greatly save construction time, save manpower, and reduce production costs, thereby obtaining an efficient space that requires less cost and labor, and uses more conventional materials.

Spread the cost over 8-10 years, after which the steel can be sold as scrap. Secondly, containers that have been used for more than 10 years have gradually withdrawn from the logistics field due to high maintenance costs such as paint peeling and box deformation. These waste and second-hand containers still have a completely original image after being abandoned. After simple cutting and combination, still has renewable value, prefab modular buildings will extend the service life of containers by more than 10 years. The recycling and reuse of such waste and used containers enable the original high-carbon steel plate materials to be fully used, reducing a large number of repeated pollution caused by returning to the furnace and reducing carbon dioxide emissions, thereby reducing the consumption of resources and the adverse impact on the environment.

Recycling a used and used container can save 1.7 tons of steel and 0.4 cubic meters of wood, and reduce carbon dioxide by 3.49 tons. If 100,000 waste and second-hand containers are used in a year, 349,000 tons of carbon dioxide can be reduced, and 340 million kWh of electricity can be saved. Based on the above two points, the environmental protection and low carbon of prefab modular buildings are beyond doubt.

If there is anything else that makes a shipping prefab modular building look environmentally friendly, it is undoubtedly its mobility. When you want to live in another city, you can use a crane and a truck to move the house as a whole. If you are like the one in “Flying House” The protagonist is just as imaginative, and you can put your home in the air with a hot air balloon!

The scale of container construction

However, with the development of architectural concepts, container construction has gradually entered the vision of architects in recent years and has become one of the regular businesses.

The urban space planning organization in the United Kingdom applies containers flexibly as components of houses. In 2001, a new “city” in the London Docklands – “Container City” was built. Because of the urgent demand for houses made of environmentally friendly materials in the area, another new “city” was built next to the “Container City” in 2002.

The shortage of student housing has not been alleviated for many years in the Netherlands, especially in cities where colleges and universities gather, such as Amsterdam, Utrecht, and Leiden. Every year in September, when freshmen enter the campus, there are advertisements posted by students all over the campus. Those who do not have housing either live in makeshift tents or spend hours a day commuting from their parent’s homes to school by train. Local governments and real estate companies have invested a lot of manpower and material resources to solve the problem in recent years.

The pragmatist Dutch people have added housing units very efficiently in a short period of time by converting shipping containers into student housing in this simple, fast and cheap way, and now the expansion plan has been basically completed, with three large container student housing complexes built in Amsterdam alone.

The containers are stacked into five-story dwellings, each with a generous patio in the middle for common space and bicycle storage. The complex also features a supermarket, bike repair shop, restaurant, laundry room, and basketball court, all of which are also converted from shipping containers.

From Container City in London, England, to student apartments in Amsterdam, the Netherlands, this kind of block-like container architecture approach has been rapidly replicated for its cost, efficiency, and environmental friendliness. Globally, about 300,000 TEU of containers are used to build prefab modular buildings every year, with a construction area of more than 500,000 square meters. 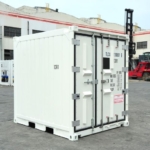 Differences Between Standard And Offshore Containers 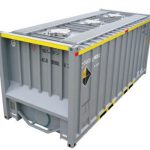 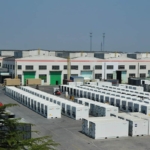 Shipping Containers: What You Need to Know